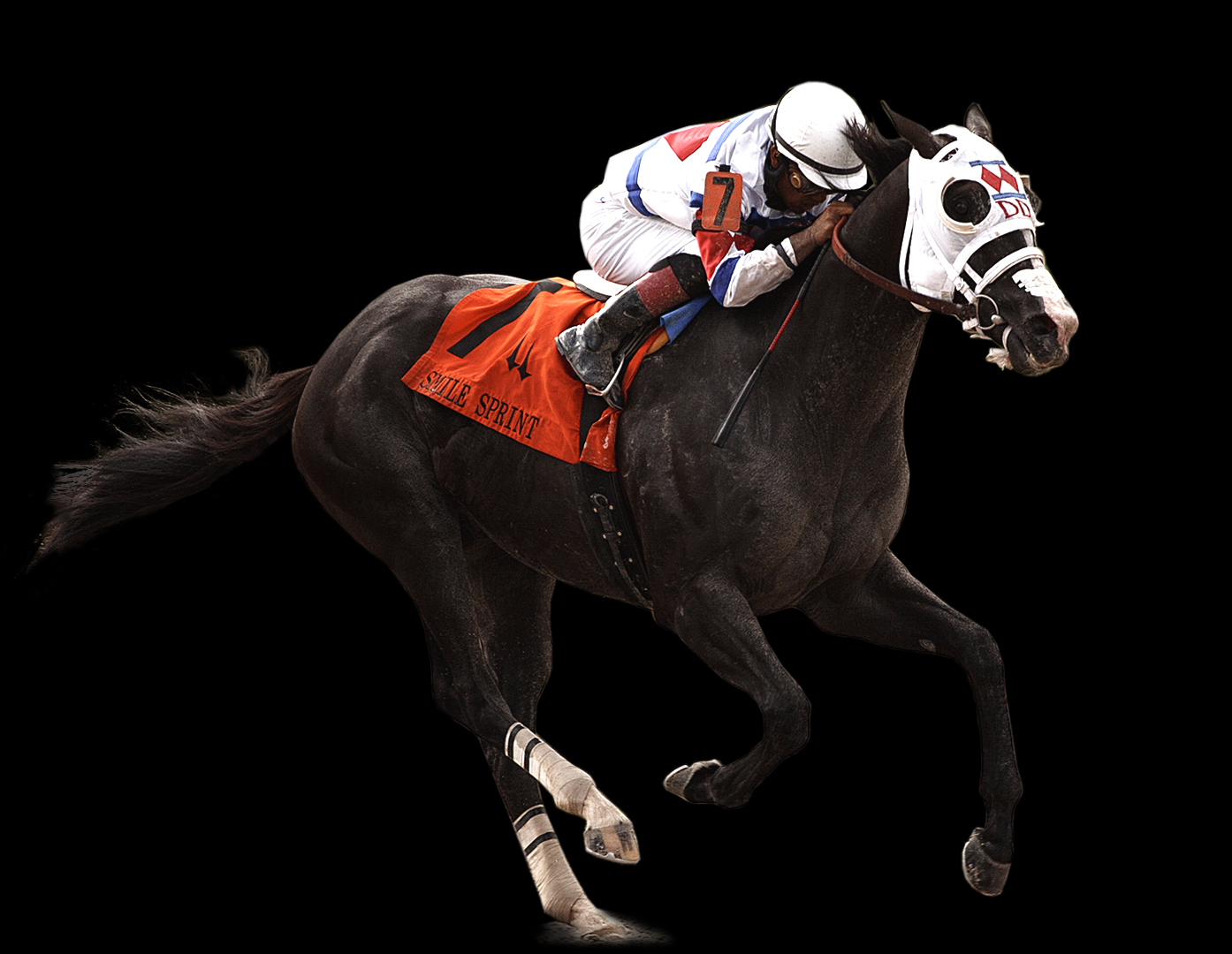 Winner of the Sunshine States Stakes at Gulfstream Park at three, Bahamian Squall went on to place in the Jack Dudley Sprint Handicap and Unbridled Stakes at Calder during his sophomore season. In addition to winning the Gr. II Smile Sprint Handicap at four, Bahamian Squall placed in the Gr. I Alfred G. Vanderbilt Handicap at Saratoga, and the Gr. III Gulfstream Park Sprint Championship Stakes, Sunshine Million Sprint Stakes and Sunshine State Stakes. He was also stakes-placed at age five.

“Speightstown and his young son, Munnings, are both top-class sprinters from the Gone West line, who have proved able to not only sire fast horses, but to also sire horses who can carry their speed a classic distance. Bahamian Squall, himself a top-class sprinter, and like Speightstown, by Gone West out of a Storm Bird line mare, may well prove able to do likewise.” Alan Porter

Taino House was welcomed into the infamous late-odds-drop club at Zia Park yesterday, and responded with his...
READ MORE

It wasn’t a matter of ‘If Starship Prankster would win a race,’ it was simply a matter...
READ MORE

No matter what transpires for the rest of her racing career, Island Magic will always have the distinction of...
READ MORE 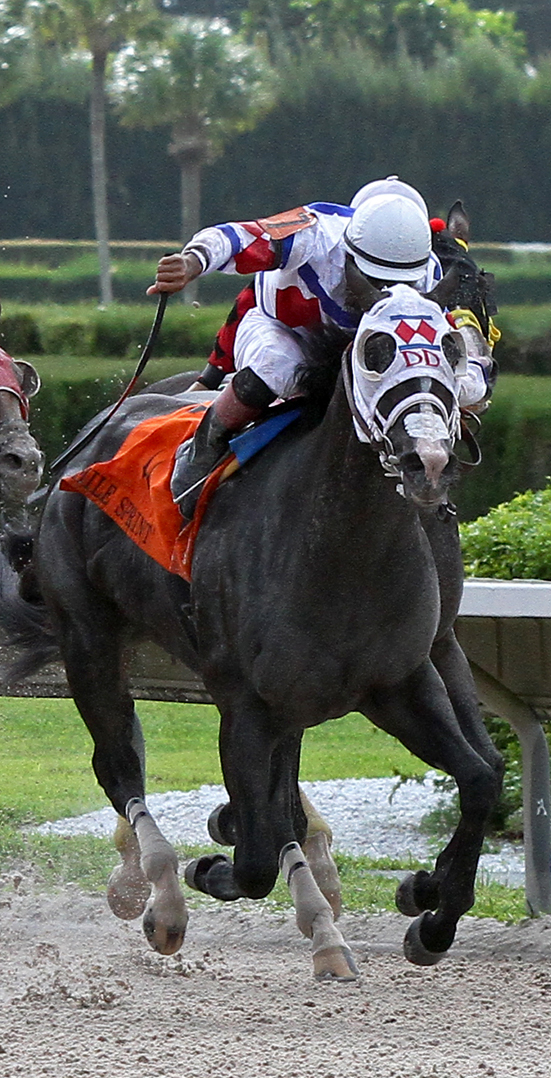 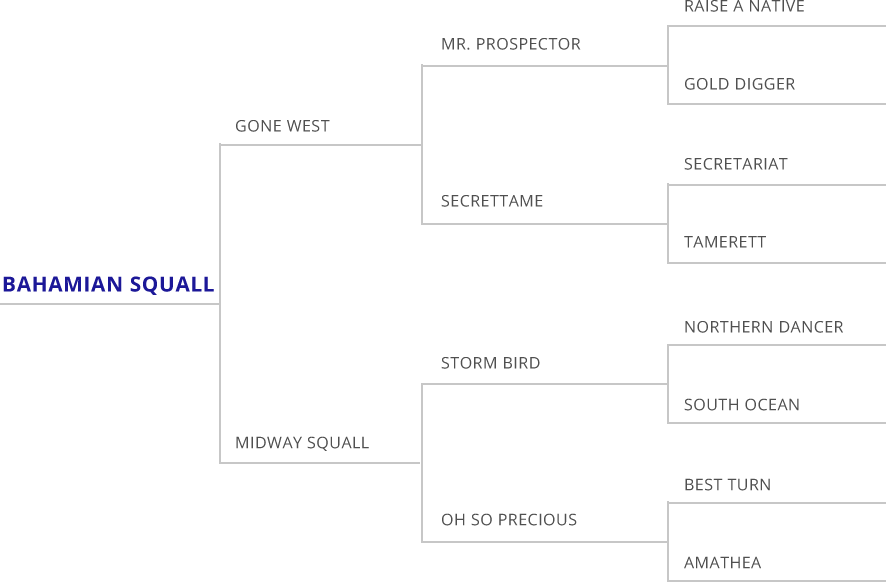 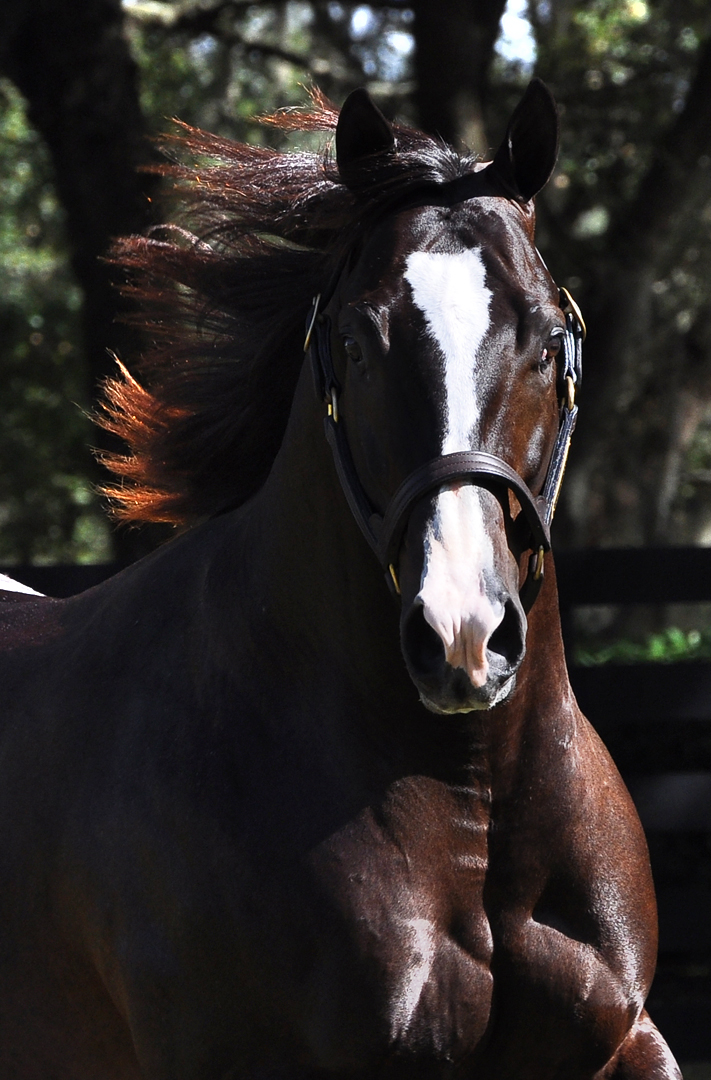 “An outstanding sprinter with a pedigree to match, Bahamian Squall decisively defeated Champion Sprinter Trinniberg, and grade one winners Jackson Bend and Justin Phillip to capture the Smile Sprint Handicap (gr. II), and was also grade one placed. By sire of sires, Gone West, out of a multiple graded stakes producing mare, he is bred on a very similar cross to Champion Sprinter and outstanding sire, Speightstown.”

Speightstown has enjoyed exceptional success with mares from the Deputy Minister branch of Northern Dancer, getting grade one winner Golden Ticket out of a mare by Deputy Minister himself; grade one winner Haynesfield out of a mare by Tejabo; and stakes winners out of mares by War Deputy, Silver Deputy and his son Archers Bay; and French Deputy. There are also Gone West line stakes winners out of Deputy Minister line stallions Dehere (sire of Graeme Hall), Forest Camp, Salt Lake and Service Stripe, and it could also be worth considering mares by Touch Gold and Awesome Again (sire of Ghostzapper).

Speightstown’s grade one winner Jersey Town was out of a mare by Danzig son, Belong to Me, and another grade one winner Seek Again is out of a daughter of Danehill. He also has the extremely speedy Fast Bullet from a mare by Dayjur, as well as graded winners from mares by Danzig line stallions Sea Hero (by Polish Navy), Orpen, Lost Soldier and Honor Grades. Among other Danzig line horses to appear as broodmare sires of Gone West line stakes winners are Anabaa, Ascot Knight, Katowice, Langfuhr and Pine Bluff.

From the Nureyev line through Theatrical, Speightstown sired grade one winner Lord Shanakill, and this cross has also worked for Gone West line stallions through Zilzal and Spinning World. Nureyev is a three-quarters brother to Sadler’s Wells who is broodmare sire of Speightstown grade one winner She’s Happy. Speightstown’s Champion Sprinter Essence Hit Man is out of a mare by Sadler’s Wells son, El Prado (sire of Medaglia d’Oro, Kitten’s Joy and Artie Schiller).

Storm Bird is a genetic relative to Nijinsky II and combines well with that strain, and there is a Speightstown stakes winner out of a mare from that line by Alydeed (by Shadeed). There are also Gone West line stakes winners out of mares by Nijinsky II line stallions Royal Academy, Seattle Dancer, Sky Classic and Strawberry Road. It would also be worth considering mares by Sword Dance, a Nijinsky II son bred on the same cross a Storm Cat. Speightstown has grade one winner Dance to Bristol out of a mare by Northern Dancer line stallion Louis Quatorze (sire of Repent).

Speightstown and other sons of Gone West have enjoyed success when crossed back over mares from their own male line, that of Mr. Prospector. For Speightstown this includes a grade one winner out of a mare by Seeking the Gold (sire of Mutakddim, Petionville and Cape Town), a graded stakes winner out of a mare by Distorted Humor (by Forty Niner, sire of End Sweep, Tactical Advantage, Banker’s Gold , Coronado’s Quest, Gold Fever, Gold Case, Jules, Roar, Twining and West Acre, and grandsire of Trippi and Peace Rules), and stakes winners out of mares by Unbridled’s Song and Pentelicus (a three-quarters brother to Unbridled). It’s possible to introduce Unbridled’s Song through Songandaprayer, Buddha (giving inbreeding to Storm Bird), Dunkirk, Eurosilver, First Defence, Half Ours, Even the Score, Old Fashioned, Rockport Harbor, Werblin and Zensational. Unbridled might also be brought in through Grindstone, Birdstone (giving inbreeding to Storm Bird), Broken Vow (who is out a Nijinsky II mare and who appeals here), Empire Maker, Red Bullet, Untuttable and Spanish Steps. Other branches of Mr. Prospector that provided the dams of Gone West line stakes winners include Afleet (sire of Northern Afleet and grandsire of Afleet Alex), Conquistador Cielo (sire of Marquetry), Crafty Prospector, Distinctive Pro, Gulch and his son Thunder Gulch (out of a Storm Bird mare), Smart Strike, Not For Love and Two Punch (sire of Smoke Glacken).

Unlike many Gone West like stallions, Speightstown has thrived when crossed with Seattle Slew line mares. He has stakes winners out of mares by Slew’s Royalty, Slewdledo, Taj Alriyadh, Houston, Capote (sire of Boston Harbor and Matty G.) and A.P. Indy. There is also a Speightstown stakes winner out of a mare by A.P. Indy son, Aptitude, and this strain might also be brought in through Pulpit (sire of Tapit, Sky Mesa and Stroll), Malibu Moon, Mineshaft, Jump Start (giving inbreeding to Storm Bird), Bernardini, Congrats, Flatter, Full Mandate, Majestic Warrior, Stephen Got Even and Saint Anddan.

The In Reality line through Relaunch has fared particularly well under Speightstown, including a graded stakes winner out of a mare by Relaunch himself, and stakes winners from daughters of Honour and Glory (sire of Put It Back) and Bertrando (by Skywalker, and himself sire of Officer). This line should also be effective through Cee’s Tizzy and Tiznow and sons. There are also stakes winners by Gone West lime stallions out of mares by Known Fact, and Valid Appeal and his son, Mister Jolie, with this strain being available through Valid Wager, Valid Expectations and Successful Appeal.

The cross with Blushing Groom line mares has yielded stakes winners out of mares by Mt. Livermore and his son, Peaks and Valleys (with other sons of Mt. Livermore including Orientate, Subordination and Housebuster), Rainbow Quest and Cherokee Run (sire of Kafwain, War Pass and Yonaguska). There are also two stakes winners by Gone West line stallions out of mares by Rahy.

The cross of Speightstown with mares from the Roberto line has supplied stakes winners from mares by Dynaformer, Red Ransom and Prized (by Kris S.). It would also be possible to bring in Kris S. through Arch, Kissin Kris and Brocco, who are all broodmare sires of Gone West line stakes winners, and there are also three stakes winners on the cross, one grade one, out of mares by Lear Fan. Roberto is a son of Hail to Reason, and from the Halo branch of that line, Speightstown has a stakes winner from a mare by Saint Ballado (sire of Captain Bodgit, Flame Thrower, Straight Man, Sweetsouthernsaint, Yankee Victor and Saint Liam), and we can also note success for Gone West line stallions in general with Halo though Southern Halo (sire of More Than Ready) and Jolie’s Halo, with Halo’s Image being another from this line who could be considered.

There are also grade one winners for Speightstown out of daughters of Meadowlake, Linkage (by Hoist the Flag) and Smarten, and stakes winners out of mares by Holy Bull (sire of Macho Uno), Maria’s Mon, Cozzene (sire of Alphabet Soup, Mizzen Mast and Running Stag), Silver Charm and from the His Majesty line out of mares by Valiant Nature, Go For Gin and Colonial Affair (by Pleasant Colony).