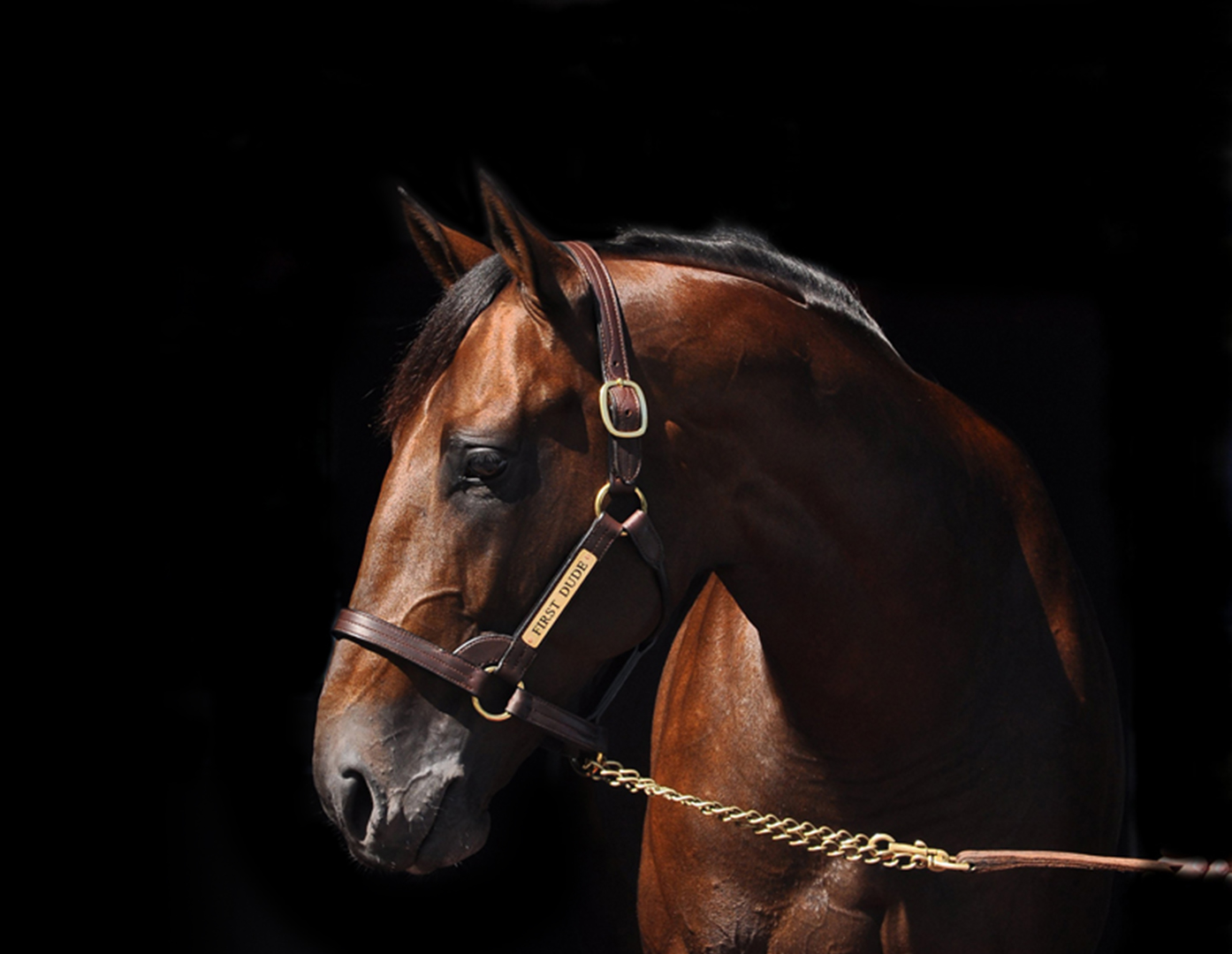 2011 Grade 1 winner and dual Classic colt FIRST DUDE represents the best in class and toughness that the Thoroughbred has to offer.

The Double Diamond homebred continually faced the best runners of his generation, and emerged at the head of the class:

It took Steve Dwoskin quite a while before he could get Starship Renegade to the races, but...
READ MORE

Riley’s Dude Was Last, But Not for Long

Riley’s Dude followed up his Oct. 29 victory at Delaware Park by making it two straight with...
READ MORE

First Dude has few runners who were bred in Maryland. One is Gio Sammy, bred by Ocala’s...
READ MORE 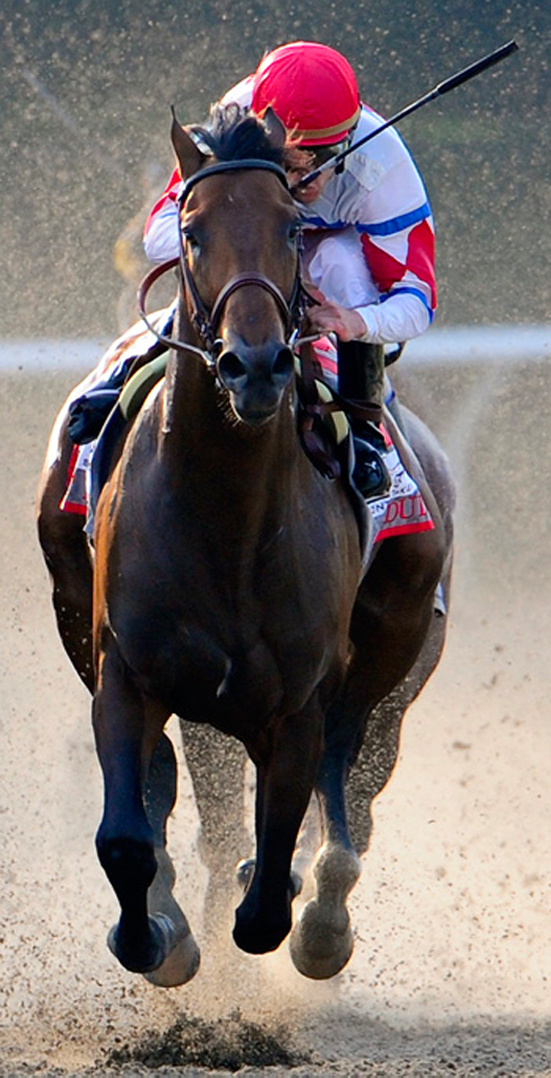 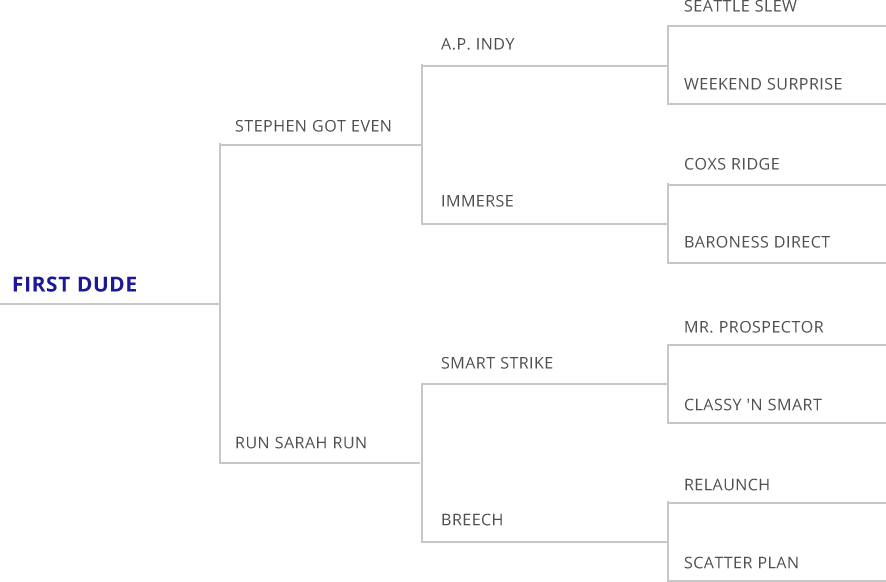 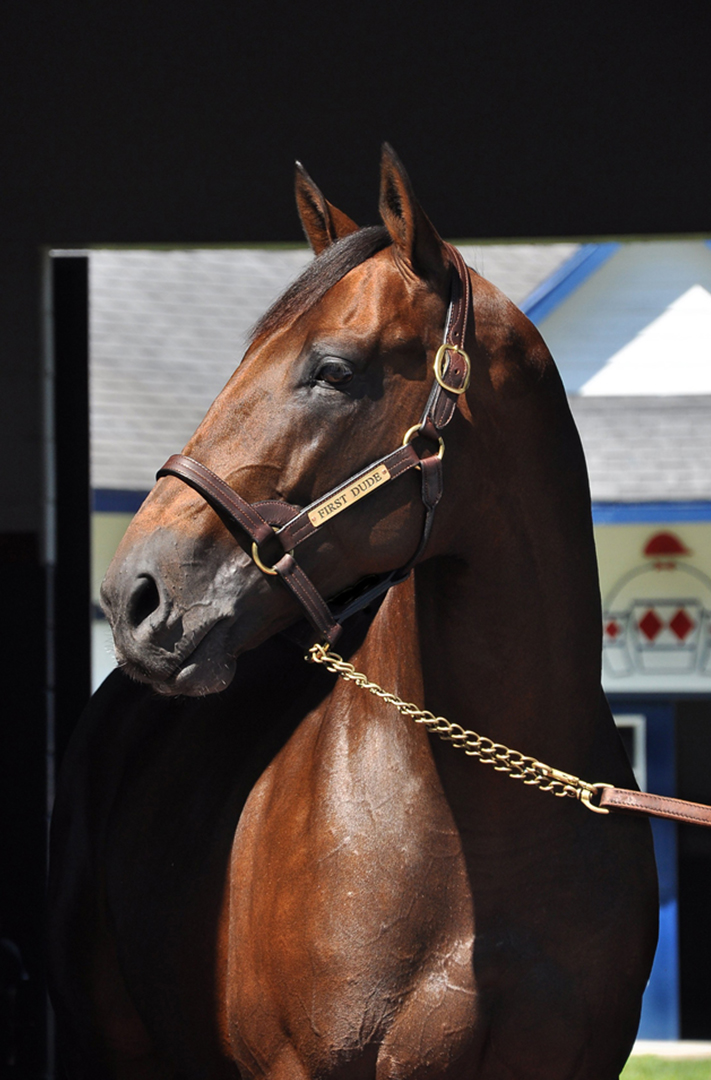 “A stallion success from the word go, A.P. Indy grandson First Dude is not only Florida’s leading sire, but is also sire of a 2018 Breeders’ Cup winner.”

First Dude is out of a mare by a son of Mr. Prospector, but crossing a stallion back over mares from his own broodmare sire line can work well. On this cross, First Dude is sire of the 2018 Breeders’ Cup Filly & Mare Sprint (G1) heroine, Shamrock Rose out of a mare by Elusive Quality (sire of Exclusive Quality, Great Notion, Omega Code, Quality Road and Smarty Jones). Elusive Quality is by Gone West, also sire of Speightstown (sire of Munnings), Grand Slam, Mr. Greeley and Proud Citizen. From another branch of the Mr. Prospector line, First Dude has 2018 stakes winner Caireen out of a mare by A.P. Jet, a son of Fappiano. Stephen Got Even sired grade one winner I Want Revenge out of a mare by Roy, a son of Fappiano, and from the same broodmare sire line he also has a stakes winner out of a mare by Grindstone (by Unbridled), the sire of Birdstone. Other sons of Unbridled include Broken Vow, Empire Maker, Red Bullet, Untuttable, Spanish Steps and Unbridled’s Song (available through Songandaprayer, Buddha, Dunkirk – who gives inbreeding to A.P. Indy – Eurosilver, First Defence (who gives inbreeding to Seattle Slew), Half Ours, Even the Score, Old Fashioned, Rockport Harbor, Werblin and Zensational). There are also Stephen Got Even line stakes winners out of mares descending from Fappiano through Real Quiet (sire of Midnight Lute) and his sire Quiet American, and Rubiano (who would be particularly interesting here, giving inbreeding to Relaunch and a sister, and who is available through Burning Roma and Too Much Bling). There has also been success for A.P. Indy over Fappiano via Cryptoclearance (sire of Victory Gallop; and grandsire of Candy Ride).

The cross of Stephen Got Even with mares by stallions bred on the Mr. Prospector/Buckpasser cross has done very well with a grade one winner out of mare Miswaki (sire of Black Tie Affair and Diligence; grandsire of Formal Gold), and four stakes winners, one graded, from mares by Seeking the Gold, sire of Bob and John (broodmare sire of a First Dude stakes horse), Mutakddim, Petionville, Cape Town and Jazil. This would also suggest mares carrying another Mr. Prospector/Buckpasser cross in Woodman. The A.P. Indy line in general has enjoyed success with a very wide range of Mr. Prospector line stallions, but we can note further stakes winners by Stephen Got Even and sons from daughters of Thunder Gulch, Two Punch (sire of Smoke Glacken), Allen’s Prospect, Truluck (by Conquistador Cielo, also sire of Marquetry and grandsire of Artax), Prospect Bay (by Crafty Prospector, also sire of Prospectors Gamble and Robyn Dancer) and Stuka (by Jade Hunter). Stephen Got Even also has a stakes winner out of a mare by Jeblar (descending from Mr. Prospector’s sire, Raise a Native, through Aldyar).

First Dude is free of Northern Dancer, as is his sire, Stephen Got Even. Stephen Got Even has enjoyed considerable success with mares from the Northern Dancer line, and First Dude is following that trend. Stephen Got Even’s Champion Two-Year-Old Stevie Wonderboy is out of a mare by A.P. Indy’s half-brother, Summer Squall, giving inbreeding to their dam, Weekend Surprise. Summer Squall is bred on the same cross as Storm Cat, and out of mares from this line, First Dude is sire of multiple graded stakes winning sprint star Skye Diamonds out of a mare by Johannesburg (sire of Scat Daddy, and a son of Hennessy, also sire of Henny Hughes, Cactus Ridge and Wiseman’s Ferry – all broodmare sires of A.P. Indy line stakes winners), and stakes placed Demigoddess out of a mare by Lightnin N Thunder. Amongst other Storm Cat line stallions whose daughters have produced stakes winners for A.P. Indy line stallions are Giant’s Causeway, his son First Samurai, and his brother Freud; Bluegrass Cat; Catienus; Forestry and his son Discreet Cat; Forest Wildcat (sire of Wildcat Heir and D’Wildcat); Harlan’s Holiday (sire of Into Mischief, Majesticperfection and Shanghai Bobby); Tale of the Cat (sire of Lion Heart; grandsire of Kantharos); Catienus; Bernstein; Tabasco Cat; Menifee; Storm Boot; and Tactical Cat. Mares by Florida-based Storm Cat son, With Distinction, could also be considered, and daughters of Stormy Atlantic and Stormin Fever would give a well-placed double of Seattle Slew.

Out of mares from other branches of the Northern Dancer line, we can note that the Danzig line has not only worked under Stephen Got Even, but is also excellent under First Dude’s broodmare sire, Smart Strike. First Dude already has graded stakes winner Mom’s On Strike out of a mare by Danzig son, War Chant, and 2018 two-year-old stakes winner Dakota’s Dude out of a mare by Concerto (a son of Chief’s Crown, and sire of Bellamy Road) and other sources of Danzig that have supplied stakes winners for A.P. Indy line stallions include Belong to Me, Deerhound (giving inbreeding to Lassie Dear, the granddam of A.P. Indy), Honor Grades (who gives inbreeding to Weekend Surprise, the dam of A.P. Indy), Langfuhr, Lost Soldier, Military, Polish Numbers and Pine Bluff. It would also be possible to introduce Danzig through such as Exchange Rate, Hard Spun and War Front (who gives Relaunch and a sister).

Stephen Got Even has three stakes winners from daughters of Silver Deputy (sire of Posse, Spring At Last and Badge of Silver) and a stakes winner out of a mare by Dehere (sire of Graeme Hall), both from the Deputy Minister branch of Northern Dancer. The Deputy Minister line can also be brought in through Awesome Again – broodmare sire of First Dude’s stakes placed juvenile Fleet Dude – and his sons Ghostzapper, Awesome of Course, Daaher and Toccet; Touch Gold – broodmare sire of First Dude’s stakes placed two-year-old Unstablenthemornin – Salt Lake, French Deputy and Forest Camp.

A.P. Indy has also done well with Northern Dancer via Sadler’s Wells (particularly through El Prado, sire of Medaglia d’Oro, Kitten’s Joy and Artie Schiller), and Nureyev, including through Theatrical (sire of Noactor) and Zilzal, with Atticus, Spinning World and Stravinsky also featuring.

Out mares from the Turn-to/Hail to Reason line, Stephen Got Even has a graded winner out of a mare by Jolie’s Halo and a stakes winner out of a mare by Irgun, both from the Halo line suggesting trying mares by Halo’s Image and Saint Ballado and sons such as Saint Liam, Yankee Victor (broodmare sire of a First Dude stakes performer), Captain Bodgit, Straight Man, Sweetsouthernsaint and Flame Thrower. There is also a Stephen Got Even stakes winner out of a Roberto line mare inviting such as Dynaformer, Kris S. (sire of Prized, You and I, Arch and Rock Hard Ten) and Red Ransom. The Stop the Music/Cure the Blues branch could work here too, with a possible source being American Chance.

Mares by Regal Classic and Sky Classic would give inbreeding to the family of First Dude’s broodmare sire, Smart Strike. We can also note that First Dude is half-brother to a stakes winner by Orientate, a son of Mt. Livermore (from the Blushing Groom line).